Since I was only 6 years old during Woodstock, it is obvious that I didn’t attend this historical music festival. So, the next best hippie chic music experience I deem close to what I’ve heard regarding Woodstock is #BottleRock Napa, a 3-day musical playground with culinary chef demos, and yes… lots of wine. The event is, after all, in the Napa Valley, and it draws in 150,000 attendees in a 3-day period. 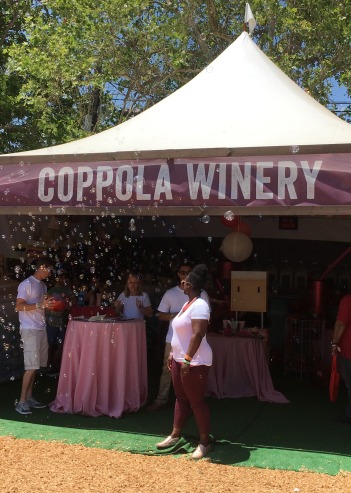 Inspired by a cloud of soap bubbles from the tent of Sonoma-based Coppola Winery, my first stop was in front of the tent for Domaine Chandon, where I happily sipped Chandon Rosé bubbles. I wasn’t even concerned about the plastic cup it was served in…it was that good.

A walk in the nearby Wine Garden, is where I sipped Napa Valley white wine, Dissonance. I was told this is the label of Foo Fighters, ‘so I couldn’t wait to sip this rock star wine. But, unlike the awesome rock band’s stellar reputation and performance on Sunday, May 28, Dissonance fell a bit short, or sour to describe the taste. It was a bit too acidic; perhaps with a plate of fries. Next time, I’ll try the merlot, which is what Blackbird in French means, and what has put this label on the oenophile map.

d that there were distinct Foo Fighter wine labels for Blackbird Vineyards:

Like missing out on Woodstock, I missed out on sipping these Foo Fighter wines and will always wonder how these small-run labels performed on the palate.